Relaxation in the countryside

At Sainte Sabine Castle, nature is omnipresent. An 8-hectare park surrounds the hotel and is a small game reserve for fallow deer, mallards, hares and other forest animals. The flowers, the morning dew and the song of the birds create a calm and relaxing universe in the rooms and apartments.

During your stay in love or family in Burgundy, you will like to stroll in this haven of greenery and breathe the perfumes that emerge there. Calm and serenity are the watchwords of our house where the romantic setting of the castle and the bucolic landscapes of Auxois make Château Sainte Sabine an ideal destination for a romantic weekend in Burgundy.

When the weather is nice, take a dip in our heated outdoor pool nestled in our park in the shade of prying eyes and rest on one of the deckchairs at your disposal.

Our uniqueness? This superb view of the typical bogy landscapes of Auxois and the medieval castle of Chateauneuf on its rocky outcrop. 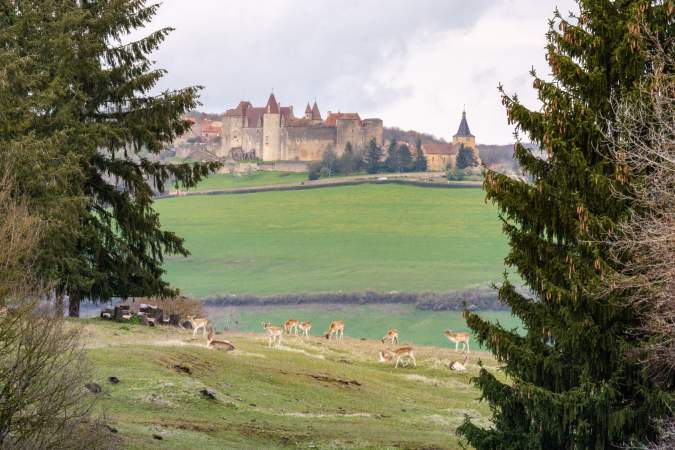 Originally a monastery, home of priests established in Lassey by St. Martin, which was destroyed in the 9th century. From this date until the 12th century, the village belonged to different Lords, then to several Maisons de France.

In 1625, the family DE MESSEY having no direct suzerain undertook to build a castle to rule as lords on the region. Gaspard DE MESSEY began construction in 1630. He bought the common "les Lapinières" to be master of both sides of the river and to enlarge his enclosure. Against the cemetery was the Cure he obtained by exchange to align the court and make it independent. Along the public highway, he bought houses with a garden and an orchard. Only the garden remains, named after the name of the former owner of the houses, M. Jacotot. The lords DE MESSEY are the only ones to have actually lived the Castle.

In the 20th century, the DE BARBUAT family occupies the castle. In 1960, the castle and the park was sold to Mr. BOURGEOIS who converted it into a private mansion then Mr. GILINSKY who transformed it into a hotel-restaurant. For three decades, this house remains fixed in time ... Period furniture, armor, room guards, stained glass ... Not to mention the naturalized wolves, guardians of this historic landmark.

And it is on November 25, 2011 that Susanne & Jean-Louis BOTTIGLIERO take over this house and after impressive renovation works, the latter reopened on June 21, 2012.